You have the opportunity to spend the night at any residence in pop culture. Where do you go?

There are so many places that I would want to visit and sleepover.   Narrowing it down to just one was difficult.   Brainstorming, I came up with about 30 different places.    Since I have always loved TV shows from the 60s and 70s, one house immediately came to mind. 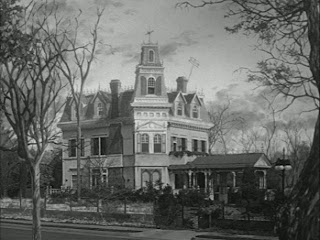 My first thought was that I would love to spend the night at the Addams' family house.  The house is gorgeous, even if it is slightly creepy.  I don't know that I would really sleep.   At a sleepover, do you really sleep anyway?

I think the Addamses would be the perfect hosts.  You certainly wouldn't be bored.     You would be greeted at the door by Lurch, GRRRRRR.   Then Gomez and Morticia would engage you an interesting and absurd conversation until Lurch rings the gong signalling dinner is served.   Dinner might be a sketchy affair.   It might be best to take your own snacks, just in case.    After dinner,  I think joining the family on the front lawn for a little moonbathing  or some late night dynamite fishing with Fester, Wednesday, and Pugsly.      I would also like to have a harpsichord sing a long with Lurch.

I certainly would hope to have the opportunity to explore some of the other rooms in the house.   You know never what might be lurking.   Since sleeping with one eye open might be the best course of action, hanging out with Cousin Itt and Thing for a late night movie marathon would be a great way to finish off your stay.

I thought I would share some of the other residences that made my list.
The Brady House-  I would like to eat Alice's famous pork chops and applesauce.  Maybe get a chance to play a little football.  I would love to pop Marcia in the nose (she always annoyed me anyway).

Cloud City- play a few rounds of Just Dance 4 with Lobot and get some ice cream from the Cloud City ice cream man.

Big Bang apartment-  I would like to hang out with Sheldon on Monday night for some Thia food. Hopefully, I could also get in on a taping of " Fun with Flags"

A night at Castle Greyskull-  I think the Sorceress would be addicted to Lifetime TV movies and tubs of popcorn.

So where do other League members want to spend the night?

and don't forget to check out the League assignment page. 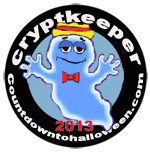